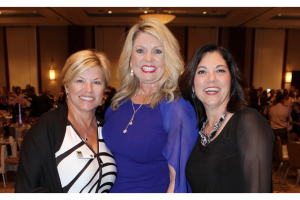 Side of Ranch: Jay Heater

Coming out of an awful 2020 for most people, Lakewood Ranch’s Angela Massaro-Fain faced a tough assignment.

The founder of Sisterhood for Good, a Lakewood Ranch “giving circle,” Massaro-Fain was out trying to get donations for her group’s “Vegas Comes to the Ranch” event that is scheduled for 6-9 p.m., Jan. 15 at the Sarasota Polo Club.

The popular school of thought would be that business owners would be entering the new year wary of spending any additional funds with a pandemic still gripping the nation. Massaro-Fain thought differently.

First, she banked on the generous nature of those who live and do business in Lakewood Ranch. Next, she thought many nonprofits had cancelled events last year, so local businesses might have some extra funds they had budgeted for 2020 but never had spent

Peggy Kronus, Willis Smith Construction’s community business development manager and a key member of Sisterhood for Good, thought of the idea for “Vegas Comes to the Ranch,” a few months back. The idea was a casino night that would be held outdoors at the Sarasota Polo Club so those who wanted to attend could easily social distance.

They could dress up like they were going to the Las Vegas Strip and they could use chips to play the games and perhaps win some prizes.

But both Kronus and Massaro-Fain needed more to raise the funds for charity needed to make the effort worthwhile. They needed to get donations from area businesses so they could hold both silent and live auctions. They also needed event sponsors.

“This event, we’ve had the most sponsors we’ve ever had (for a Sisterhood for Good fundraiser),” Massaro-Fain said. “We knew 2020 was not a great year and so many events were cancelled, but people also didn’t spend dollars they had planned to spend (for charities). Of the auction items, 100% were donated. We didn’t buy one thing.”

Massaro-Fain said Sisterhood for Good’s name is now branded in the area.

“People understand who we are and what we do,” she said.

The nonprofit now has more than 100 members, women like Kronus.

“Peggy is the co-chair for this event,” Massaro-Fain said. “The creativity and enthusiasm she brings to every event she touches is beyond anything I’ve ever seen. Nothing is ever a “no.” She always says we will get it done and then she finds a way to get it done.”

Fortunately, as the group has increased in size after starting in May 2011 with 10 members, the expertise in hosting fundraising events has increased as well.

“Now we have the talent of her entire creative team,” Massaro-Fain said.

Besides those who already have a talent for various aspects of hosting fundraising events, others learn from the Sisters.

“Philanthropy, to me, is not something you just do,” Massaro-Fain said. “It is something you learn. You don’t wake up and say, ‘I will start giving money.’ You learn by example.

“When I first came to Sarasota and Manatee, I really had my first opportunity to see philanthropy in action. Sandy Loevner was in charge of the Florida Winefest and Auction. I went to hear her speak when they gave out grants, and what struck me was that in a community that I felt was affluent, there were people struggling. It surprised me.”

Massaro-Fain said she cried as Loevner handed out the grants and those who received them talked about what they were going to do with the funds.

That event convinced Massaro-Fain to join the Lakewood Ranch Community Fund, where board member Diane Brune talked to her about starting a women’s giving circle. Sisterhood for Good was born and now Massaro-Fain is handing out the grants.

“There is so much graciousness in this community,” she said. “I realized this was an obligation for me, if I had the capability to do it. ”

She notes that not everyone can write a check for $10,000, but Sisterhood for Good’s strength is in numbers. It costs $225 a year to join. Massaro-Fain said her group wanted anyone to be able to join and be part of community philanthropy.

Anyone who wants to see the group in action can still attend. It costs $140 per ticket (purchase at www.SisterhoodForGood.org/register). The event will have 21 gaming tables, 10 bars (so people keep distanced), a cigar station and an open bourbon bar, along with the live and silent auctions.