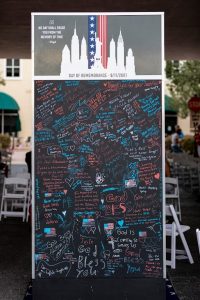 On the 20th anniversary of the 9/11 attacks, Sarasota’s Erika Miller walked in front of hundreds of people attending Day of Remembrance at Main Street at Lakewood Ranch to sing the National Anthem.

Almost every voice in the crowd joined her from the first word of the Star Spangled Banner to the last. People were proud, and they cried.

East County Observer Associate Publisher Lori Ruth told the crowd the event was put together to honor our first responders who served during the attacks, as well as the servicemen and servicewomen who defended our country in the aftermath.

Perhaps she explained it best by saying, “Americans were at their very best on the very worst day.”

Retired New York City fireman Steve Lubrino, who survived the collapse of the World Trade Center towers, told the crowd about the experience. He said while people refer to him as a hero, the heroes to him were those who didn’t come home.

He was almost killed in the collapse of the North Tower.

“I went to the right,” he said of his attempt to get away from the building. “The people who went to the left are not here today.”

He fought back tears as he noted two of his best friends, Mike Carlo and Gene Whelan, couldn’t be with him at Day of Remembrance. They were fellow firefighters who died in the collapse of the towers.

“I thank everyone for coming down today,” he told the crowd. “From the bottom of my heart … God Bless America.”

Manatee County Commissioner Vanessa Baugh spoke to the crowd as well, saying she was impressed by the big turnout.

“We remember that day,” Baugh said. “And it’s important our younger generation knows about that day.”

She said her children will know about 9/11 when they are adults.

“Blake told me everything he learned (about 9/11) in school yesterday,” she said. 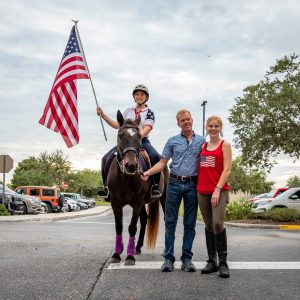 Lakewood Ranch’s Hunter McGrath Atno, a 12-year-old student at Mona Jain Middle School, presented the colors at the ceremony aboard Hormiga, a polo horse. She said she has learned a lot about 9/11 at school and was pleased to participate at the ceremony. She said it was right to honor all the first responders.

“They’re awesome,” she said. “They save lives.”

Behind those who spoke at the event was a cube that was designed by Fawley Bryant Architecture and built by Willis Smith Construction and donated to the event. The 4-by-8-foot cube, which is 8-foot high, had blackboards on all four sides so that people could write their memories and thoughts about 9/11. Almost every inch of space on the blackboards was full.

Before the ceremony could end, East County Fire Rescue received a call, and three firefighters ran to the parking lot to board truck 641. They hurried into their protective gear and pulled out of the parking lot, the emergency lights flashing.

They were off to help.