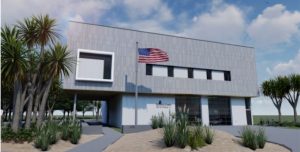 Two donations will fund gym equipment and a fence between the station and a neighboring condo.

Thanks to new funding, Fire Station 13 on Siesta Key will receive new equipment and an enhanced design to keep separation from neighboring properties.

The County Commission unanimously voted to accept a total of $69,000 in donations from two sources.

The first, a $16,000 donation from the Siesta Key Fire Rescue Advisory Council, will pay for gym equipment for the new fire station, according to county documents. A plaque will hang in the new station’s lobby recognizing SKFRAC’s contribution.

The agreement with the condo association, which sits adjacent to the fire station, arose out of a problem in May 2020, when demolition on the old firehouse began.

When employees of Willis A. Smith Construction, Inc. began site work on May 14, 2020, they demolished the structure and began clearing out vegetation so they could raise the elevation of the site.

A county memo submitted with the approval request stated that after the vegetation was removed, “It became apparent some sort of barrier would be necessary to maintain site security, limit trespassing and improve aesthetics.”

After several meetings, representatives from the county and the condo association agreed that an 8-foot solid precast wall stretching along 375 feet of the southeast property line would be a sufficient barrier.

The $53,000 donation will be used to construct the wall while the county will pay for redesign and permitting from its existing contingency. The county will maintain both sides of the wall.

Per the agreement, the county will paint the wall in its entirety every seven years as long as the property remains a fire station. It also will replace the wall if it becomes damaged.

Fire Station 13 will be replaced by a two-story structure on the same lot at 1170 Beach Road. In the meantime, firefighters are being housed in a temporary facility at 5700 Midnight Pass Road.

The original station, built in 1973, was designed to accommodate two people. The new station will accommodate four to six personnel and will be able to withstand Category 4 hurricanes.

It will have a similar footprint to the original building so it will not affect the nearby Siesta Key Beach parking.

The construction of Station 13 is part of a project to rebuild three county stations. A new station on Apex Road opened in September 2020 and another with be overhauled on Bee Ridge Road.